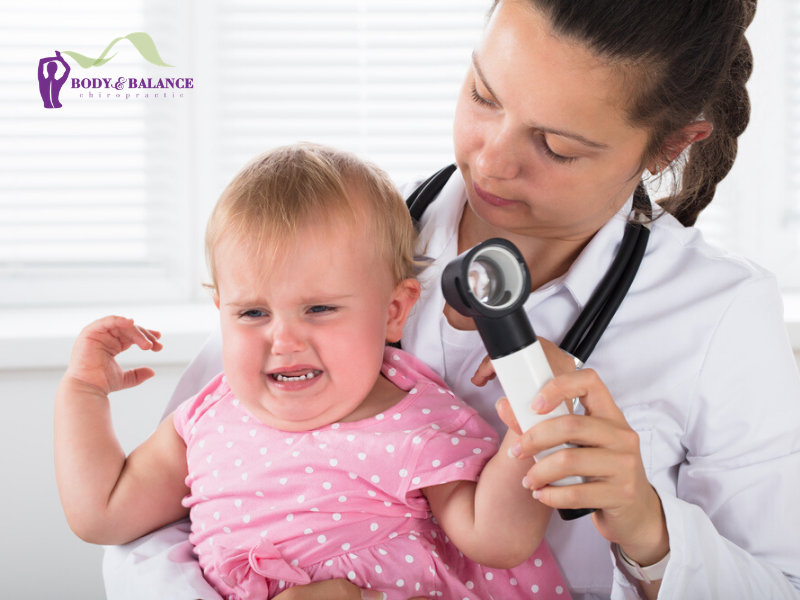 If you’ve ever held your child while they cried and tugged at their ears, you’re familiar with the signs of an earache. For the child that is too young to express how they’re feeling this can be heartbreaking for a parent. This may be why Otitis Media is the number one reason for pediatrician visits.

What is Otitis Media?

Otitis Media is the general name for several conditions that can affect the middle ear including inflammation of the middle ear. The classic symptoms of Otitis Media can be fever, earache, pressure in the ear and even temporary loss of hearing.

With the typical Otitis Media sufferer being so young it’s difficult for them to express what they’re feeling. So many parents when faced with these symptoms will be quick to think “ear infection”; however, this is not always the case.

Teething and the Middle Ear

Teething usually begins at four to five months of age but can start as early as three months. Since it can take anywhere from three hours to three weeks for teeth to break through, the symptoms can sometimes be misdiagnosed and one of the most common misdiagnoses is inner-ear infection or Acute Otitis Media.

A teething child’s gums become inflamed and cause excessive drooling, which can cause irritation to the Eustachian tubes; thus, irritating the inner ear. As a result, the child will usually be fussy and tugging on their ears, which are symptoms of an ear infection. Consequently, most parents will take their child to the pediatrician’s office where the misuse of the otoscope or a crying infant may cause a false-positive finding.

In 2004, the American Academy of Pediatrics (AAP) released the results of a study stating that Acute Otitis Media (AOM) is the most commonly diagnosed and misdiagnosed disease in childhood and is a primary factor in increased antibiotic resistance. Since there are such diverse diagnostic criteria and varying opinions regarding the use of antibiotic treatment, it is an acknowledged fact that antibiotics are being overly prescribed.

Accurate diagnosis of AOM requires recognizing the difference between a normal ear, an inflamed ear due to teething, an infected ear that requires treatment with antibiotics and Otitis Media with Effusion (OME), which is an asymptomatic disease with persistent middle ear effusion that does not require antibiotics.

In February of 2013, the AAP updated its guidelines for treating AOM. Compared to the previous guidelines, these highlighted more stringent criteria to use in making an accurate diagnosis, which will enable clinicians to prescribe antibiotics most effectively. These new guidelines included recommendations for treatment or observation alone (a wait and watch approach) based on the child’s age and the severity of their symptoms.

The results of the 2004 study stated, “Each course of antibiotics given to a child can make future infections more difficult to treat. The result is an increase in the use of a larger range of – and generally more expensive – antibiotics. In addition, the benefit of antibiotics for Acute Otitis Media is small on average and must be balanced against potential harm of therapy. About 15% of children who take antibiotics suffer from diarrhea or vomiting and up to 5% have allergic reactions, which can be serious or life threatening.”

On a more alarming note was the AAP’s warning regarding a child developing an antibiotic-resistant bacterium, which can be passed to siblings, other family members, neighbors, and other children in daycare or school settings.

In 2014, the Journal of the American Medical Association Pediatrics published the following statistics: 80% of children will have experienced 1 or more episodes of AOM by the time they are three, more than 40% will have experienced 3 or more episodes by the same age, and more than $4 billion is spent yearly on OM-related health care in the United States.

The AAP states that clinician visits for OM decreased from 950 to 634 per 1000 children in a period of 10 years, (resulting in a proportional decrease in antibiotic prescrip- tions of 760 to 484), however, the percentage of OM visits resulting in antibiotic prescriptions remained relatively unchanged (80% to 76%). Meaning that a 30% drop in clinician visits only resulted in a 4% drop in prescriptions being written.

This shows that, despite significant publicity and awareness of the 2004 AOM guidelines, the evidence shows that clinicians are hesitant to follow the suggestions.

The guidelines suggest the following:

In all instances it is best to wait-and-watch approach since most children will get better without antibiotics.

Antibiotics are not always the answer; consider the following facts before giving your child an antibiotic:

Remember, this is your child and you can take the initiative by asking your pediatrician to consider waiting 72 hours before introducing the antibiotic.

All drugs have side effects: all medications are chemicals so, when introduced to our naturally chemical-free bodies, will always create side-effects. Antibiotics have been known to cause diarrhea, vomiting, anemia, insomnia, hives, yeast infections (Candida), depressed white blood cell count and in rare cases, hemophilia.

Additionally, in 2011, the Norwegian University of Science and Technology, reported that antibiotic use in babies may increase childhood asthma risks. When babies are given antibiotics, their risk of developing asthma by age 6 may increase by as much as 50%. The relationship between antibiotic use in babies less than six months old and the risk of developing asthma has been clearly documented.

Take the common-sense approach to Otitis Media and consider Chiropractic care. The Fallon study with 332 participating children suggests that Chiropractic care may be more effective than any drug therapy. Since the Chiropractic adjustment removes nerve interference it makes way for the body’s innate ability to heal itself.

Be aware that your Chiropractor is not opposed to antibiotics when necessary. But, as a profession, all Chiropractors acknowledge that over usage is prevalent in the United States and Canada and the habits of medical doctors may not have caught up with the latest information and research.